We are constantly looking for the nuggets we find during our travels in France and Europe. It is through exchanges with different collectors that we have gathered this wonderful collection of geraniums for you. 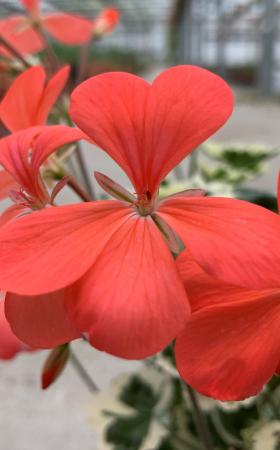 Its different species have very different forms and biotopes. The plants commonly called "geraniums" by florists do not belong to the genus Geranium but to the genus Pelargonium. Nevertheless, some Geranium species can be found for sale as perennials. In this case, they are referred to as "perennial geraniums".

The genus Pelargonium includes about 230 species of perennials, succulents, sub-shrubs and shrubs, most of which are semi-evergreen. Cultivated as geraniums, they grow from the mountains to the deserts of South Africa. The many cultivars, obtained from about 20 species, are popular plants in the garden.

The biggest mistake would be to get bored of this attractive flower just because you see so many of them. On the contrary, it is proof of its strength, and many childhood memories are linked to the power of its colours and the scent of its crinkled leaves. The geranium in all its forms deserves to occupy half of your flowering decor, associated with other plants, of course, especially as there is no shortage of new ones.

In order to clarify the sometimes confusing nomenclature around the Pelargonium genus, here is a classification that might help you see things more clearly:

- The fancy geranium, which corresponds to the Pelargonium zonale, is one of the most widespread. It displays the legendary solidity of geraniums. Their flowers or foliage are truly original and provide a real novelty. Even the most jaded of geraniums will fall for it!

- The ivy geranium is the champion of window boxes and hanging baskets. Mixed with other flowers, it gives them its tone and its robustness to drought, especially the ivy geranium Elegance.

- The florist's geranium (Pelargonium grandiflorum), otherwise known as the grandmother's cranesbill, is coming back into fashion due to its bright colours.

- The fragrant Pelargonium (Pelargonium graveolens) has the advantage of strongly scented foliage, if you rub it. Our collection of scented Pelargonium includes the most sought-after lemon cranesbill, but also many other scents.

- The Madeira pelargonium (Geranium maderens), which gives the impression of being mounted on stilts, is very popular because it has a unique architecture and is suitable for both indoor and outdoor use.

What are you looking for ?